Robert Sullivan was born on 25th December 1898 at 9 Little North Street, London. When Robert found out that his brother John had joined up he wanted to do the same. He went along to the recruitment office on the Edgeware Road but he was told he was too young. So he went along to another office and gave a higher age and gave his name as Wyatt (his Aunt's married name). All papers and medals are in the name of Wyatt. His mother tried to get him out Robert Sullivan of the army, she spoke to her local MP who got her a meeting with the Army Office at Whitehall. Unfortunately all she was told was that as he had signed up, he was in and he stays in. 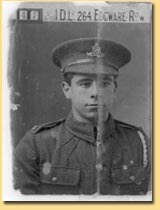 He became Driver 36030 in "A" Battery, 77th Brigade in the Royal Field Artillery and he died on 9th June 1917, aged 19. His grave is unknown though his name is on the Loos Memorial, Pas de Calais in France, Panel 3. He never married.