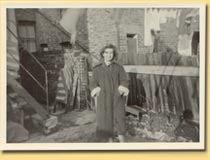 Ron served in the army during World War 2 and was awarded 6 medals including the 1939-45 Star, the Africa Star, the Italy Star, the Defence Medal, the War Medal 1939-45 and later on was given the Territorial Army Long Service Medal for 12 years service.