John Sullivan was born on 20th April 1890 at 33 Little North Street, London, and baptised on 27th April 1890. He married Mary Ann Soley on 20th June 1910 at St. Marylebone Register Office. Mary was born on 23rd April 1888 and died on 20th September 1945. There were three children of the marriage, John Lawrence, Mary Elizabeth and Thomas. 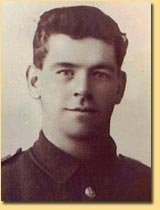 John became Private 12575 in the 5th Battalion of the Northamptonshire Regiment and was killed at the Somme in World War I on 13th October 1916, aged 25.

His grave is unknown but his name is on the Thiepval Monument to the Missing in France, Pier and Face 11 A and 11 D. This memorial is always shown on T.V. when films are shown of the World War I armistice day are shown.

Whilst fighting in World War I he was awarded the 1914 - 1915 Star, the British War Medal and the Victory Medal. Also, because he was killed in action his family was presented with a Memorial Plaque.

Luckily my Great Aunt Mary kept all the letters from the Army that were sent to my great-grandmother when my great-grandfather died during World War I. These include the letter notifying the family of his death and ensuing correspondence. Click here to view these letters.